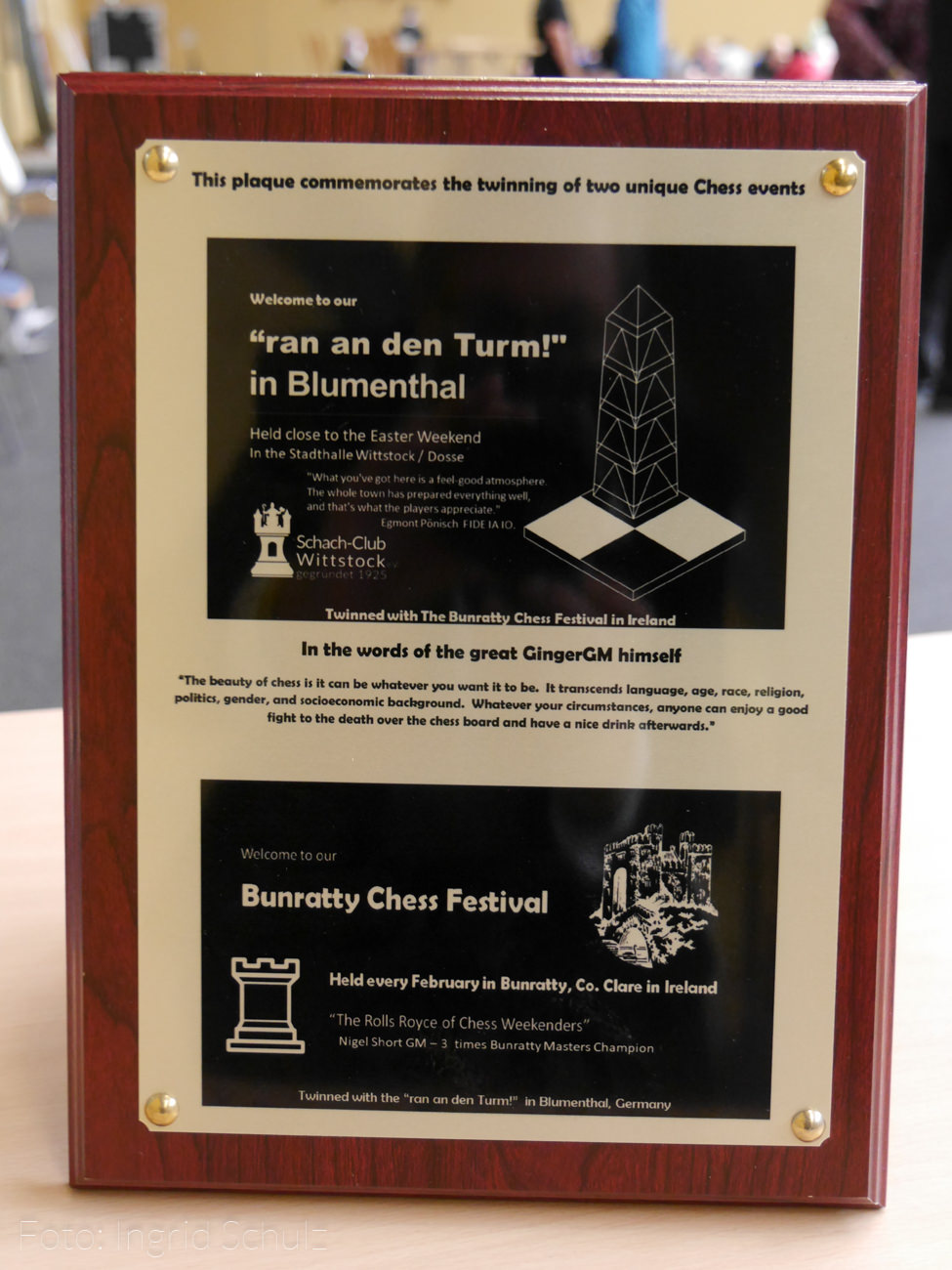 The four members of the Bunratty Chess Festival, Paul Carey, Brian Scully, Ted Jennings and myself, Gerry Graham were lucky enough to be invited to take part in a Chess event in Germany recently. The kind invitation came from Rainer Knöchel, the main organiser of the “ran an den Turm” Chess event, which is normally held close to Easter, but for obvious reasons, was a bit later this year. Pictured above is the venue for the event in Wittstock.

We were delighted to accept the invite and packed our bags for the trip not really knowing what to expect. We were viewing this as not just a good social opportunity and a chance to play some Chess, but also a “fact finding” mission. We were sure we could learn from seeing how the world famous “German Precision Engineering” would be moulded into running a Chess event, more on this a little later.

Rainer himself has come to Bunratty twice and enjoyed his time there, despite his having very little English. A very special thanks needs to be extended to Uwe Walschus (pictured left) who not only acted as our translator for the entire visit, he has also been a tireless promoter of Bunratty in Germany since he first visited our event in 2016! Indeed, quite a few of the players in this event had visited Bunratty multiple times so we felt it was about time we visited this one.

The event is held in a small town called Wittstock which is about 2 hours by car from Berlin. Rainer had very kindly arranged for us to be collected from Brandenburg airport and we were made to feel very welcome from the moment we landed. The first evening was marked with a social gathering in Rainer’s home town of Blumenthal, attended by players and officials alike. This was a really enjoyable affair with good food, really good beer, good conversation and some very dodgy music by me! (Proof of this is above)

The following day was marked by various events, outdoor simultaneous displays, trips for the players etc., a great idea for the players to get to know the area and each other a bit before the Chess actually began.

The event was a 5 round Swiss, three games on Saturday and two on Sunday, all Irish players should be used to that but, the time control was not something we would be used to. There were two time periods, 1 hour each to play 30 moves, followed by 30 minutes for the rest of the game, with no increments. Anyone remember the Allegro Finish rules?, we didn’t, at least not very well, but they were in effect here. While the time control was a surprise, Paul, and Brian didn’t mind it at all, Brian said he actually preferred it. I for one, am not a fan and I’m sure Ted wasn’t either.

Another small surprise for us was the time keeping, or rather the timing of the start of the rounds. In most Irish events, you could set your watch by the Arbiter’s “start White’s clock” shout, but not in Wittstock. Remember I referred to the “German Precision Engineering” and wondered how it would be moulded into running a Chess event, in short, it wasn’t. Some round times were over 30 minutes later than scheduled, but no one seemed to mind.

There were 7 sections, from Masters down to Section A, B and so on to F. Paul Carey played in section B, while Ted and I played in Section C, Brian played in section D, as did Uwe. I won’t dwell too much on the Chess results, that’s not the focus of this article, but a measure of how seriously we took the Chess can be measured by the fact that as round 2 was being prepared, all of us applied for a “Beer Bye” in round 3. This was not a problem and we used it well. If anyone is interested in the results, etc, they can be found here.

We met an old friend who was also playing in the event, IM Chris Baker of England (Pictured above) Chris, was of course, playing in the Masters, and it was great to catch up with him again.

Chris wasn’t the only friend with whom we reacquainted, Tino Wagner who has played Bunratty at least 3 times that I know of, along with his lovely daughter Swenja were also our companions for most of the weekend. We also caught with young Jannis Lange and of course Uwe, as previously mentioned. I think Tino, Swenja and Jannis are all in competition to see who can make it first to “achieve” 5 Bunratty weekends, I’m sure Uwe is already there!

I suppose the question could be asked if I’d recommend the “ran an der Turm” as an event you should consider if you’re planning a trip abroad for Chess and the answer is absolutely. It’s a very friendly, relaxed event, and as long as you leave some time to visit the beautiful countryside before and after the event, you couldn’t possibly be disappointed. The venue itself is quiet, spectators are only allowed in the balcony area, and are so well behaved, I never noticed them.

What the two twinned event might learn from each other

One thing I must mention is the food and drink at the venue was exceptionally good value for money, half the price it might be here in Ireland. It was also very good quality, quick and easy to get. While I don’t think that the food at Bunratty is anything but good quality, it’s far more expensive than it was here.

Small things are sometimes very much appreciated and in ran an der Turm, all our scoresheets were neatly laid out for us with a plastic backing pad, something which we must consider doing. I didn’t see any branded pens though, I may have missed them.

Another thing that differentiated the two twinned events is live boards, they don’t use them. I think that this is a pity as they have certainly helped Bunratty “spread” the word, and if adopted here, would certainly help them get a few more foreign players interested in coming. When Chess24.com started following the live Bunratty games, it had a measured effect on our foreign inquires.

I also noticed that there is no available pgn of the Masters event, again this might be something for them to consider, their top games would quickly make their way into the latest version of Bigbase, which can’t hurt.

And one final point, which I’ve already mentioned, is the time control. Speaking from a personal point of view, I don’t like it, it requires Allegro Finish Rules to be applied, and I think that a 15 sec increment will deliver the “natural” result of a Chess game more often than any no increment game. Allegro finish rules also require more arbiters to be on duty. All in all, I do understand that this time control is their tradition, and I’d also understand if they decided to keep it, but since they have all digital clocks at the event, I think it might be time for a re-think, but that’s just me, what do I know.

One last note, normally when I do a report for this website, I do all the photos myself, but not this time, all photos were expertly taken by either Matias Lazarte or Ingrid Schulz. Ingrid is the wife of one of the many I.A.s at the event and she joined us for a few chats over the weekend, Bunratty doesn’t have a monopoly on “friendliness”.

It was a really great experience and one I will do again next Easter, when the event returns to its traditional slot in the calendar. 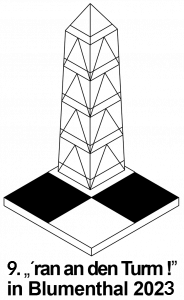 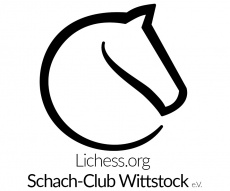